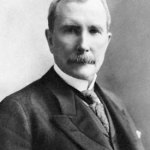 John D. Rockefeller created the Standard Oil Company in 1870, eventually building it into the largest oil refiner in the world, and becoming America’s first billionaire. His worth was estimated to be $336 billion in today’s dollars, making him the richest person in history. Clearly, he knew how to create big wins. And you can do exactly the same–even if you’re barely starting out.

While at the helm of Standard Oil, Rockefeller was known for his attention to detail and relentless pursuit of efficiency. Even in later years when Standard Oil was a mammoth conglomerate, Rockefeller continued improving operations.

In the early 1870’s, while touring a plant that filled and sealed 5-gallon cans of kerosene, Rockefeller observed a machine soldering tops to the cans. He asked the machine operator, “How many drops of solder do you use on each can?”

“Have you ever tried thirty-eight?” Rockefeller asked.

“Would you mind having some sealed with thirty-eight, and let me know?” Rockefeller asked.

“That one drop of solder”, Rockefeller later said, “saved $2,500 the first year. But the export business kept on increasing after that and doubled, quadrupled–became immensely greater than it was then. And the saving has gone steadily along, one drop on each can, and has amounted since to many hundreds of thousands of dollars.”

What this means for you

Rockefeller approached his business with a mindset of ceaseless improvement, measuring, tracking, testing and iterating to find what worked best.

Rockefeller knew that even a penny saved would be multiplied thousands of times across his vast business.

You don’t necessarily need to test everything, but an easy starting point is to look for bottlenecks and choke points, since fixing these often creates big wins.

And every business–whether you’re just getting started consulting, or are a behemoth Standard Oil monopoly–has areas ripe for big wins.

What areas do you know you could tweak for big wins?

What have you done to test whether you can move the needle toward improvement?

For example, you could:

You may not even realize you have it. But there are always big wins you can create, often from small, simple changes to what you’re already doing.

What I need from you

I’m curious. Email me right now or comment below and let me know–even a sentence or two would be helpful.

Would you rather mine gold or sell kittens? (the surprising answer) - April 8, 2015 Reply

This is so inspiring, will want to investigate further