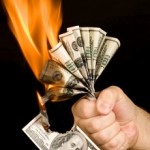 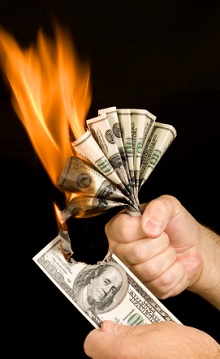 Yep, $14,000. Lost. Poof! Gone. This was the biggest of my business mistakes, and my wife won’t let me forget it–though I don’t blame her. In truth, like any disaster, it wasn’t just one mistake, but several.

It started a couple years ago when I got a phone call from a new client. They wanted a custom application that would let their users create a report in a fairly simple way, and then manage the data from a web front-end, which would tie back to their main database. Apart from the web thingy–which was and still is out of my expertise–it sounded a lot like other things I’ve done, although on a larger scale and with lots of moving parts.

We had several meetings with several layers of staff to discuss the project scope and requirements, and I was eventually able to create an estimate for the project. The client approved it, and I got to work.

For the web piece, I outsourced that to an overseas developer who actually did a fairly good job, though I learned a lot about how to manage and communicate with contractors whose native language isn’t English. But that piece got done and cost me probably 1/20th what it would have taken me to learn and develop on my own. The outsourcing wasn’t the problem.

Things take a turn, and my business mistakes start

As I developed the reporting and database pieces, I ran into other issues and questions, and the answers ended up changing the project requirements–sometimes very significantly.

In retrospect, the problem started when the specs for this fairly large project weren’t nailed down at the start. The client had the general idea, but several very significant details hadn’t yet been worked out. Along the way, other specs changed and got more involved–if you’ve ever done project management, you’ll recognize this as scope-creep.

Being a people-pleaser, I wanted to do whatever I could to make sure that the project was a success and that the client was happy, so I kept saying “yes” to all the changes–without mentioning how those changes were out of scope from my original estimate. That was the first of my business mistakes, and I made it several times during the project. By the time I finally discussed it with the client, I’d already done a lot of work and the project was already well underway.

How can you avoid these same business mistakes?

Sometimes the best lessons are the most expensive. Here’s a summary of my $14,000 lesson:

What’s been your biggest mistake so far, and what did you learn from it?

Go ahead, don’t be shy. We’ve all made our share of business mistakes, and the more we own up to them, the less likely we’ll repeat them.

My mistake was agreeing to pay a licensing fee on behalf of a client so she could pay me back tne money together with my fee when the project was completed.

When it was time for her to pay, she refused saying she did not ask me to pay on her behalf. How could she pay now that her pain problem was solved. Sio I had no choice but take drastic steps to get my money back — minus my usual fee. I now collect a deposit before attempting to take on any consulting work. Shows you cant trust anybody where your livelihood is concerned.

At least thats how I felt after making this silly business mistake.

That sucks that your client didn’t pay!

I had 1 client–a former colleague–who didn’t want to pay after I’d done the work, and nearly had to go to small claims court to get paid. Fortunately, with the thinly-veiled threat of going to court to collect the payment, the client eventually paid. But it was a stressful experience, and one I’d rather not repeat.

You’re right though: these painful lessons (hopefully) make us act more wisely so we don’t repeat the same mistakes.