Lessons learned from getting lost

Many years ago, an old friend and I got took a trip and got lost.  Not lost like “I wish we could find a decent place to eat in this neighborhood”, but really lost.

We were traveling through South Dakota on our way to Yellowstone and Glacier National Parks, and had set up camp in the Black Hills, which is a fairly large area (over a million acres) of mountains, forests, rivers, free-roaming bison, bears, mountain lions, etc.  We decided to spend a day mountain biking, so rode out of camp and into the mountains.

It was a beautiful summer morning, and we found a dirt road and followed it further and further into the high country.  The road branched several times, fading out into long-abandoned logging roads overgrown with wildflowers.  Along the way, we took whichever fork looked more interesting. 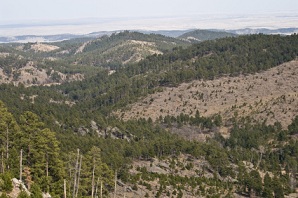 About mid-day, we realized we were lost.

We stopped, and took stock of the situation.  We had no map, and a granola bar and water bottle each.  We’d already drank most of our water.

We were fairly high up on a mountain, but couldn’t see a road or building from our vantage point.  So, we figured we’d go to the top of the mountain to see if we could get our bearings.  After slogging up to the mountain top, we looked around, and though it was a breathtaking view, there were no roads or other signs of civilization in sight.  I started thinking of what it would be like to spend the night out there without a tent, food, water, and plenty of dangerous critters roaming around.

At the bottom of the mountain was a river.  We figured if we headed down the mountain and followed the river downstream, we’d eventually–keep your fingers crossed–get to a road.  From there we’d be able to flag someone down and get directions or help if we needed it.

So, back down the mountain we went.  From this point, we were essentially carrying our mountain bikes, since there was no trail and the ground was too rough and steep for riding.

When we reached the river at the bottom, we followed it downstream.  That worked OK for a little while, until the river turned, and on our side was a sheer rock wall maybe 30-40 feet high.  Rather than climb around it and stay on the same side of the river, we decided to cross the river, which was actually pretty refreshing, despite lugging our bikes over the rocks and brush.

We continued down the river, but soon met with another bend and another impassable rock wall.  We crossed the river again, and kept going.

All afternoon we followed the river downstream, crossing and re-crossing it whenever it made a turn and another rock wall blocked our way.

About the time the sun was setting, we finally made it out of the mountains and saw a road ahead as the river flowed across a broad, grassy plain.  Back on the road, we could finally ride our bikes again, and slogged the last couple miles back to camp as it was getting dark.  Too tired to cook dinner, we ate a few snacks, then fell dead asleep, completely exhausted.

What does this have to do with starting or running a business?

I freely admit that this isn’t a stuck-under-a-boulder-and-cut-your-hand-off story, but it was a bit scary.  We were young and inexperienced, and didn’t prepare like we should have.  But we kept our wits about us, and problem-solved our way out.

When you run a business, you’ll encounter new challenges and problems every day, and you’ll need to be able to handle whatever comes along.

Don’t get bogged down in unproductive emotions. We could have:

But none of it would have helped. What moves you forward is focusing on the problem at hand and generating options to solve, overcome, or work around the problem.  Evaluate your options, decide on one, go forward with it, and evaluate.

Be flexible, and change course when your first plan doesn’t work. Don’t blindly continue doing something that isn’t working.  We could have said early on, “Gee, we can’t see the road from this mountain top!  Let’s try that mountain top instead!”  That’d be stupid.  Instead, we thought of a different option that had a reasonable chance of success.

Push through the difficult times, being reasonably sure that you’ll be able to get yourself where you want to be.  There will be plenty of times when running a business will be tough, when you’re alone, and when you just need to do the work to get to a better place.  Push yourself.  You’ll find that you’re capable of amazing things.

Remember the positives. Whether you’re slogging through a mountain stream or running your own business, it’s an amazing adventure.  Challenging yourself and facing the unknown builds strength of character.

What are your toughest challenges?

How do you push yourself to work through them?

When have you felt lost, and what did you do about it?