Would you rather mine gold or sell kittens? (the surprising answer) 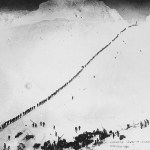 On August 16, 1896, gold was discovered in the Klondike region of the Yukon, in northwest Canada. Over the next 3 years, roughly 100,000 people rushed there, hoping to strike it rich. (Yes, mining gold and consulting are a lot alike–stick with me for a minute and you’ll see).

But getting to the Klondike was a brutal and dangerous ordeal.

The most common route required hauling a year’s worth of supplies–literally 1 ton of food, tools, and provisions–on foot, over treacherous, ice-covered mountain passes, using makeshift packs.

The 33-mile journey had be made dozens of times, before a prospector had his year’s worth of provisions assembled at the headwaters that led to the goldfields.

And even after reaching the headwaters, would-be prospectors then had to chop down trees, fashion the wood into crude rafts, then float the remaining 500 miles of perilous whitewater river to reach the gold fields. (And you thought YOUR commute was bad…) 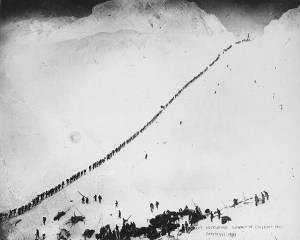 Worse yet, once they reached the gold fields, virtually all prospectors found few opportunities and never struck it rich as they’d envisioned. Most ended up toiling in the gold fields for day wages.

But, some enterprising prospectors, realizing they wouldn’t strike it rich from mining, made hefty profits doing something completely different.

One prospector decided to carry several dozen kittens to the Klondike mining fields. The other miners, lonely and desperate for companionship, bought the kittens for an ounce of gold apiece.

Which seems like the easier way to earn an ounce of gold:

The point is this: yes, you know it’s better to work smarter, not harder, but what does that mean? What does that look like in practice?

For now, I’ll give a couple clues:

Mining gold and consulting: You can do the same

But maybe you feel like you’re beating your head against a wall, getting no results.

Maybe you feel like those prospectors who followed the herd, only to find out that the gold fields were already claimed.

Do you feel like it’d help to have someone help guide you toward getting better results? Like selling kittens? Or a reliable pipeline of kittens worth their weight in gold?

Next time, I’ll share something I’ve been quietly working on.

For right now, email me now and tell me how badly you need help with your biggest challenges.

Curious to hear what you think.