How football player Danous Estenor lifted a car: the key to accomplishing the impossible 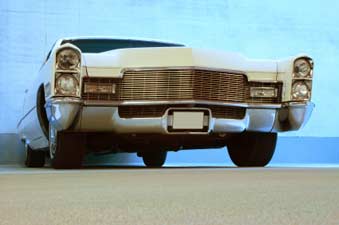 University of South Florida offensive lineman Danous Estenor had just stopped for a bite to eat at a campus restaurant when he heard screaming outside.  He ran to the scene to find a towtruck driver pinned under a Cadillac.  Three other people were trying in vain to lift the car.  Estenor tried too, but couldn’t budge the vehicle.

He stepped back, then tried again.  This time, he lifted the car.  The towtruck driver was pulled from under the car, and fortunately, only sustained cuts, bruises, and a dislocated shoulder.  Estenor walked away from the scene, shaking in disbelief from what he’d done.

You can read more about Estenor’s amazing feat.

How is that possible?

Scientists describe what Estenor did as hysterical strength, where a flood of adrenaline allows people to perform seemingly impossible feats of strength.  Since the phenomenon is so rare, scientists don’t completely understand it, but there have been other documented cases, where regular people–not an offensive lineman like Estenor–were able to lift cars in extreme instances.

What it means for you

While you may not be able to lift a car, you can still perform incredible, seemingly impossible feats.

Starting a consulting business–or any business–might seem impossible, implausible, and unrealistic.  Others will tell you that you’re foolish to even try to start a business.  They’ll point to all the statistics of how many businesses fail.  Even with hard work, persistence, and luck, you can still fail. The odds seem stacked against you. It seems impossible to think that you can create a successful business.

Harness and channel the power of emotion to do the impossible

By using powerful emotions like anger or fear, you can push yourself to do things you never before thought possible.

I’ve talked about this before, but you can focus on all the lousy things about your current situation to motivate you to take action and move yourself toward a better place.  Don’t like your long commute?  Hate your boss? Whatever it is, get mad about it.

Same with using fear.  Vividly picture your possible future as if each day was a repeat of your worst, most stressful, difficult, or dreary days.  Imagine that you had never tried anything different, that you allowed opportunities to slip away, that you frittered away time instead of taking action.  Imagine your regret and self-recrimination about not having acted.

Until you’ve had enough and are too fed up to continue, you won’t be able to make changes.

Starting a consulting business may seem like a huge undertaking, impossible, and others may think you’re foolish for trying.

But remember how Danous Estenor lifted a car. You can move mountains.

Anger and Fear and do wonders for a person be it in and using these emotions to help one achieve is an art in itself. I know how to use anger/fear to help me do better at sports/weightlifting but I still haven’t made the transition to my business really.

Yep, recognizing your passion about something, and then using that energy to move you toward your goal is the key. If your car doesn’t have any gas, you can’t go anywhere.