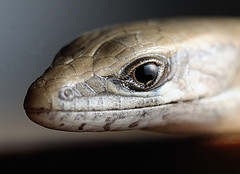 Before I talk more about Fear and Rationalization, I need to tell you a bit about your lizard brain. I ran across a post by Seth Godin, where he talks about the lizard brain and how it gets in the way of getting stuff done. (By the way, if you don’t know who Seth Godin is, he’s one of the top marketing gurus around; you can check out Linchpin or any of his other books on Amazon).

Anywho, the lizard brain refers to that primitive part of your brain that’s responsible for feeling fear, avoiding risk, and generally keeping you safe.

Now, technically, “lizard brain” doesn’t actually refer to a specific structure in the brain. However, it most closely corresponds to the amygdala, which is related to processing fear responses. End of mini-lecture.

The point is that it’s about fear and avoiding risk, uncertainty, the unknown, change, and anything perceived as threatening.

For example, Fear and Rationalization are likely to come up in these career-related situations:

Why? After all, it’s not like any of those situations puts us in any imminent physical danger–unless you have a REALLY crazy boss who’ll flip out and throttle you for trying to quit. But still, we often feel uncomfortable in those types of situations.

Since you’re here to start your consulting business, I’ll get right to it: starting a business can be scary. You don’t know what you’re doing, it’s unfamiliar, you might be risking money (although you shouldn’t be taking on debt to start your business), failure seems very real, you doubt your abilities, and on and on. You know the drill.

If you get past those obvious fears though, and start planning and researching your business, you’re about to meet Fear’s reasonable-sounding cousin: Rationalization.

Fear likes to do drama: “Oh my God! You can’t start a business! Look at how many businesses fail! You won’t be able to pay the mortgage! You’ll go bankrupt!”.

But Rationalization is more genteel about it. Rationalization comes along and says, “I say, old chap, thinking of starting a business, eh? Well, you’d better do your homework. You’d do well to draft up a business plan, run it past some trusted advisors, make the necessary changes and so forth. While you’re at it, you’ll need some thorough market research, and will need to analyze your competition. You don’t want to get in over your head, or try competing with the big boys.”

It all sounds so reasonable. Rationalization makes some good points, and he does it in such a logical way. But it’s still lizard brain, but this time, it’s getting filtered through your neocortex–that part of your brain that’s responsible for planning, critical thinking, forethought, and so forth.

Both Fear and Rationalization want to protect you from harm. But they don’t know what you do: namely, that starting a consulting business has very little risk.

Make sure that YOU drive the bus

While I’m tossing metaphors around, I’ll throw another one into the mix.

Imagine you’re in a bus and need to get across town.

If you let Fear drive, he’ll stay stuck in the parking lot, terrified of getting in an accident, or taking a wrong turn, or going through the bad neighborhoods, whatever.

If Rationalization’s at the wheel, he’ll want to look at the map, figure out how much gas you have in the tank and how many miles to your destination, then calculate whether you have enough gas, your mileage, what time you’ll get there, then start thinking about which route has the fewest traffic lights, and should you take the highway and risk the chances of a traffic jam, or take the streets and get caught in the city traffic? It’s exhausting.

Instead, you need to get behind the wheel, figure out a good-enough way of getting across town, and start driving. Fear and Rationalization will still be on the bus prattling away, but you don’t have to listen to them. You’re an adult and can make decisions for yourself. And if you get stuck in traffic, get a flat tire, or run out of gas, you’re smart enough to figure out how to take action and solve the problem.

It’s the same with your business.

Turn down the volume on your lizard brain

So what to do? Recognize both Fear and Rationalization, but dial down their volume.

They’ll always be with you, but you need to make sure that you drive the bus. Make a good-enough plan, start taking action, and along the way, evaluate your progress so you can correct problems as they come up. But don’t let Fear and Rationalization stop you from acting.